South Africa is home to some of the last remaining concentrated rhino populations, and has hence become a focus area and prime target for poachers. The advent of the 2nd rhino war, has seen a rapid escalation in the rate of poaching in South Africa for horn since 2008 (Rademeyer, 2012). Last year, a record 1215 rhino were slaughtered for their horn, and 749 already this year (Sept 2015 issued by Dept. of Environmental Affairs). Poaching has increased exponentially, despite concerted anti-poaching efforts. This is alarming to everyone concerned and together with the insatiable appetite of the South East Asian black market trade, it could effectively lead to the extinction of rhino in the near future, if left unabated. Even if anti-poaching efforts are moderately successful at reducing poaching nationally, the threat will remain and each time an animal is killed by poachers, critical genetic diversity of the species is diminished.

Despite this recovery in total numbers of animals previously, the genetic diversity of the national population of rhino remained incredibly fragile, as a result of the limited number of original F1 generation animals from which the current rhino population was bred. Recently, DNA analysis has revealed that 25 DNA probes are required to differentiate between rhino individuals (only 13 DNA probes required for humans) (Harper; Rademeyer, 2012), which also illustrates the distinct lack of genetic polymorphism in rhino as a species. If poaching continues at current rates or higher, it is not hard to see how this will further deleteriously affect the gene pool. Limited genetic diversity places a species in a particularly vulnerable situation, for example rendering the species highly susceptible to pandemic infections. With this background and in light of the current decline in population due to poaching, it is imperative that the genetic diversity of both black and white rhino is preserved now.

It is not enough to purely ‘save a species’, which technically could refer to only a few individual animals. For the species to survive and thrive into the next generation, the genetic diversity of the species also has to be conserved.

Of course as many live animals as possible must be saved, but if we can go one step further and save the genetics of additional animals, including those animals that are being slaughtered, we have a better chance that the species will not become extinct and that a degree of genetic vigor will remain.

The threat to one of the world’s last remaining mega fauna species cannot be ignored from a biological perspective and if this species is to survive this onslaught and thrive into the future, a degree of forward and visionary thinking is required. This project will provide a biological ‘insurance policy’ for rhino, as a backdrop to the security and anti-poaching efforts being carried out at present. 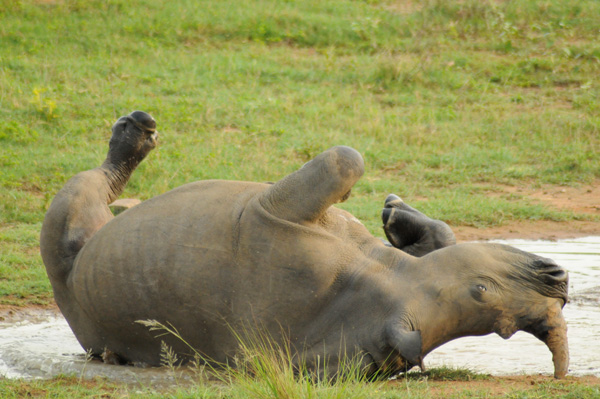